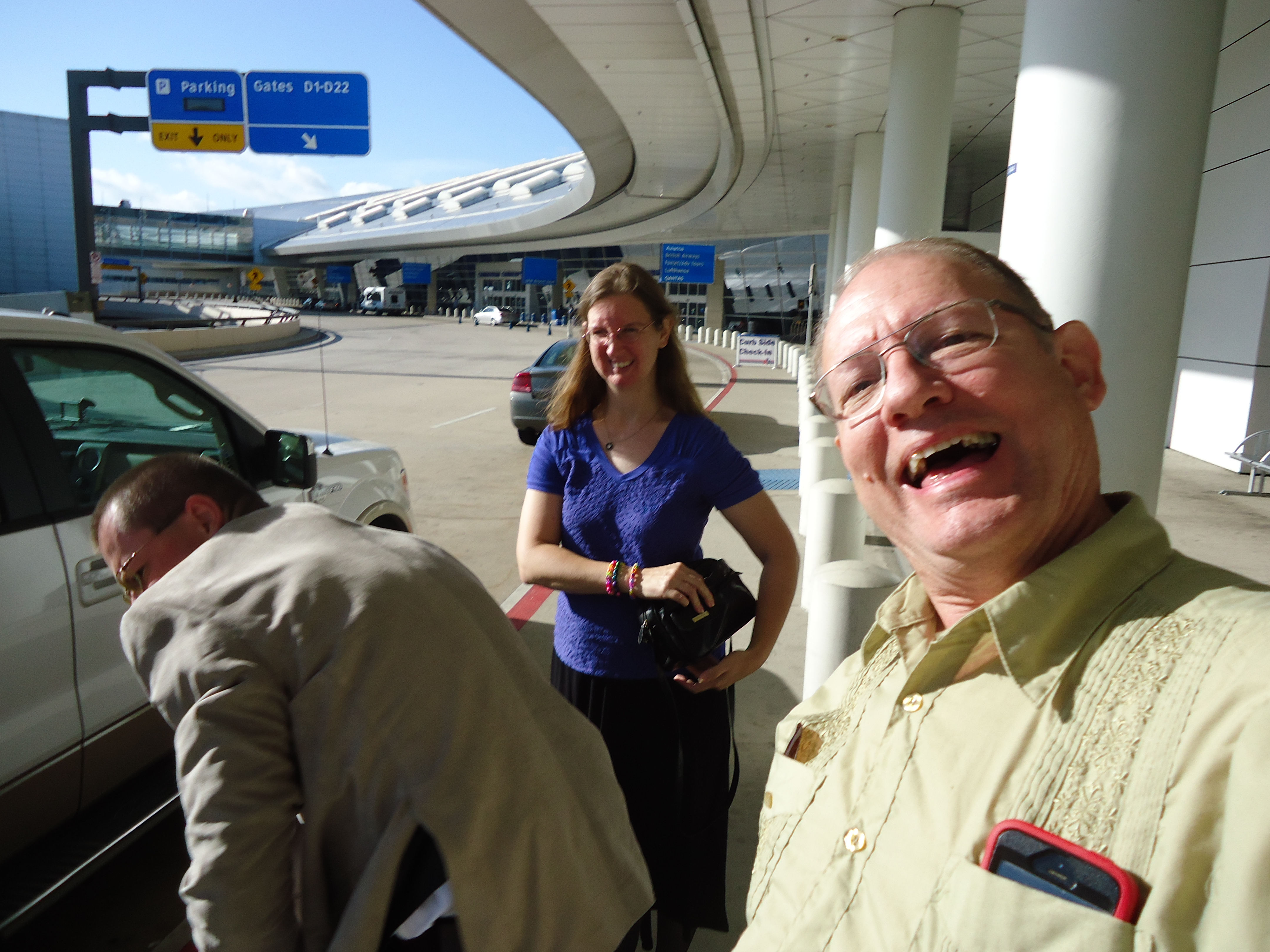 I laugh every time I see this picture. My dad dropped us off at the airport. Would this be considered a selfie/photobomb? 🙂

My husband and I are in Argentina right now. We arrived Thursday, September 4 around 4 p.m. Argentine time.

Our flight was supposed to land around 5:30 a.m. in Córdoba, Argentina. However there was a big storm and our flight was diverted to Mendoza. We waited about two hours on the plane for the storm to lift in Córdoba. Then they let everyone off the plane. We were rescheduled to fly out that afternoon. 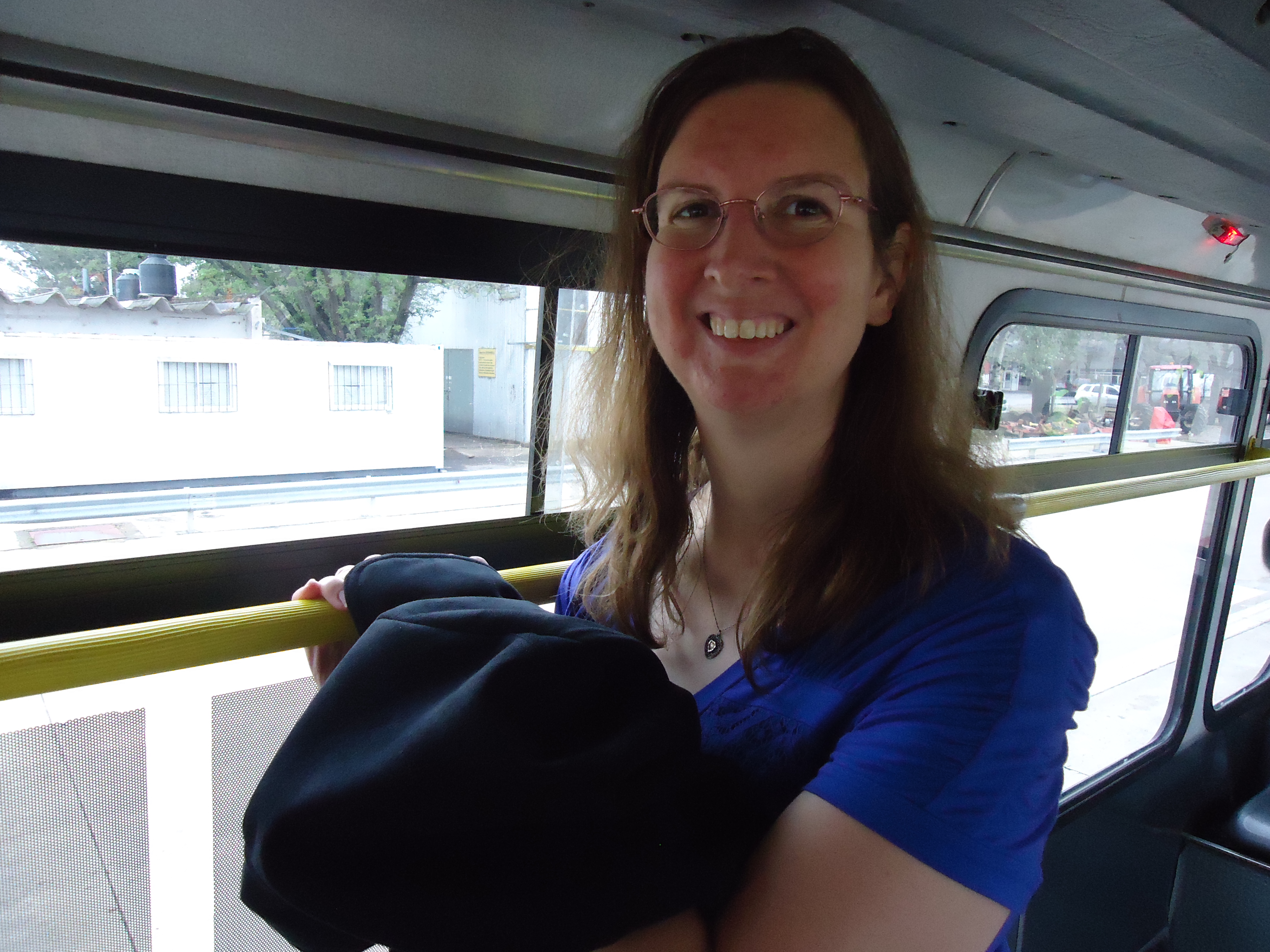 Just got off the plane in Mendoza.

We finally arrived in Córdoba and got ourselves a city bus card. We decided to try out one of the hostels. It was a little cheaper than a hotel and they usually have private rooms available.

I really think the Lord had us arrive at the particular hostel we finally chose at the time we did on purpose. You will see what I mean here in a little bit.

We arrived at the hostel and it was pretty clean. They had a room that wasn’t a private room but no one else was in it. They said we could have that room to ourselves for two nights but it would be booked over the weekend. 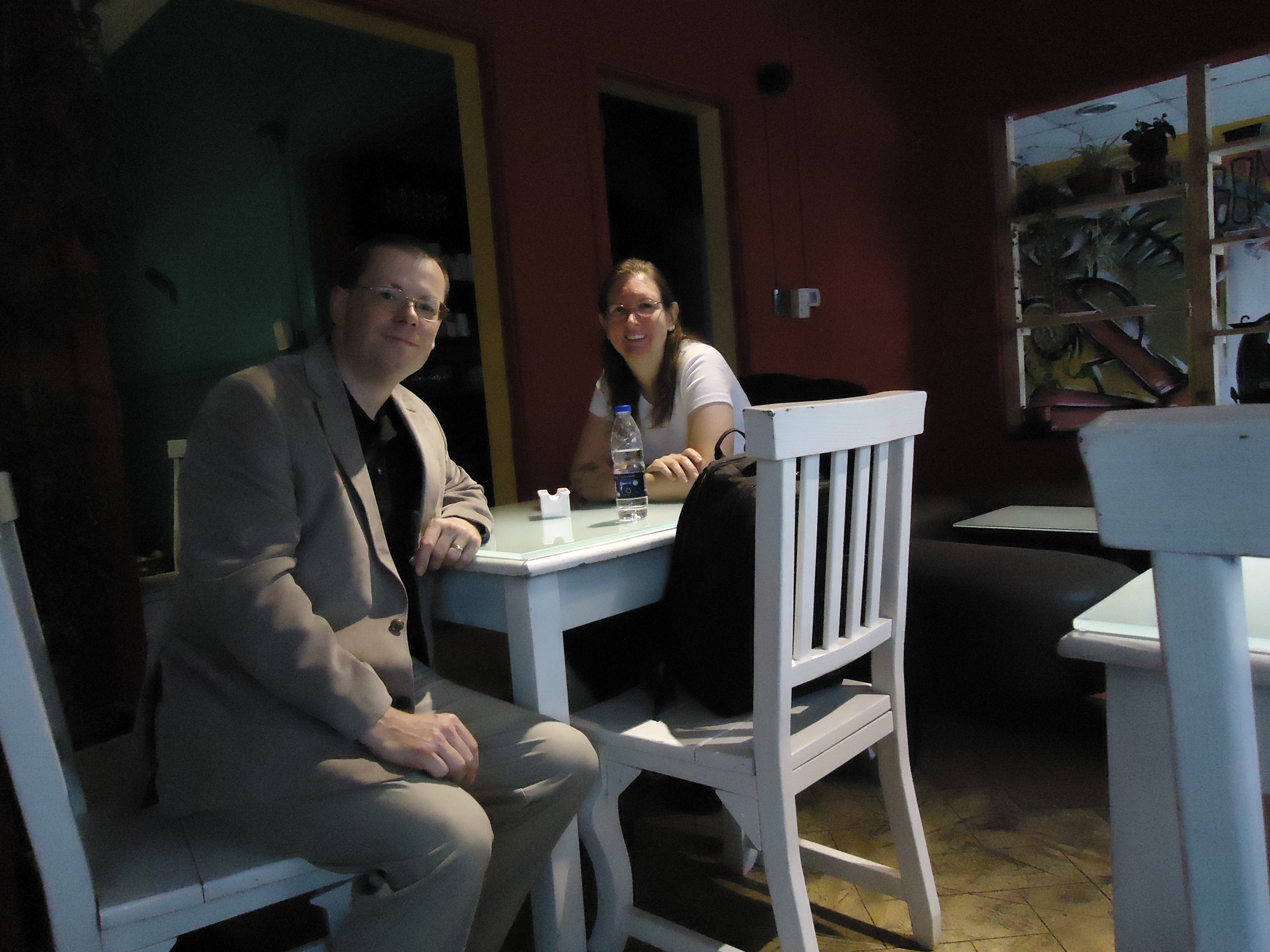 Scott and I waiting on our breakfast at the Hostel.

We went ahead and took the room. There was a double bed in the room and 3 sets of bunk beds as well. I told Scott that there was a bed for each of the kids in there.

That evening Scott struck up a conversation with the clerk at the front desk. The clerk had asked what Scott did and why we were visiting Argentina. Scott told him that he was a pastor of a church in Texas and that we were here to talk to as many people as we could and get all the information we need to possibly move our family here.

The clerk was very friendly and said that he knew a guy that led a group that practiced English. He said that they often talk about Spiritual things during their practice sessions.

We put our things away and were about to head out for the evening to find food when the clerk showed us on his computer where the group met. He said that they were having a session that very evening at 7:30.

We went out, stopped by a store for a couple of items we needed and then headed to that meeting.

Sometimes I’m a pretty nervous person… Okay, I’m often a nervous person when it comes to doing something different that might be embarrassing. In those situations I often have to give myself a pep talk that it will be okay.

So there I was knowing we were about to walk into a room of complete strangers and crash their meeting. Sure the clerk said it was okay for us to just show up but what if he’s wrong.

We arrived at the address the clerk gave us. We were a half hour late. I took a deep breath told Scott I was nervous but I knew this is what we are supposed to do.

We walked into the café and saw a lot of older people playing scrabble. Then in a back room we saw another group sitting around a table visiting. I waited a second while Scott asked them if they were the group we were told about. They were totally blown away with how we found them. They told us later that they had been praying for more Missionaries to come to Argentina.

We also found out that the hotel clerk was a friend of the session leader’s ex-girlfriend. It had been several years since they had last met. He was so surprised when we told him who it was that recommended them.

The group discussion was about God. Before we got there they had each drawn a picture that gave their thoughts about what they imagine God is like. Then they went through and discussed what they drew and what they thought of when they drew the picture. It was a very good and open discussion.

Scott was even able to share his thoughts about who God is and confirm the truths that were spoken by some of the others. During the class there were a couple of guys that believed in God but were not sure who He is.

The story came up about blind Bartemaeus and how Jesus asked him what he wanted. It seemed like it should be obvious what it was that Bartimaeus wanted but Jesus asked him anyway. Bartemaeus asked to receive his sight and Jesus healed him. He didn’t force Bartimaeus to be healed. He gave him the choice of whether he wanted that change to happen in his life or not. The question was then bounced around the room. If Jesus were to ask you what it was you wanted, what would you ask for? That my friend is a very good question.

After that meeting we went out to eat with our new friends. Most of them were actually involved in a Christian Ministry in the city and that English practice time was one of the many ministries they have to connect with people. 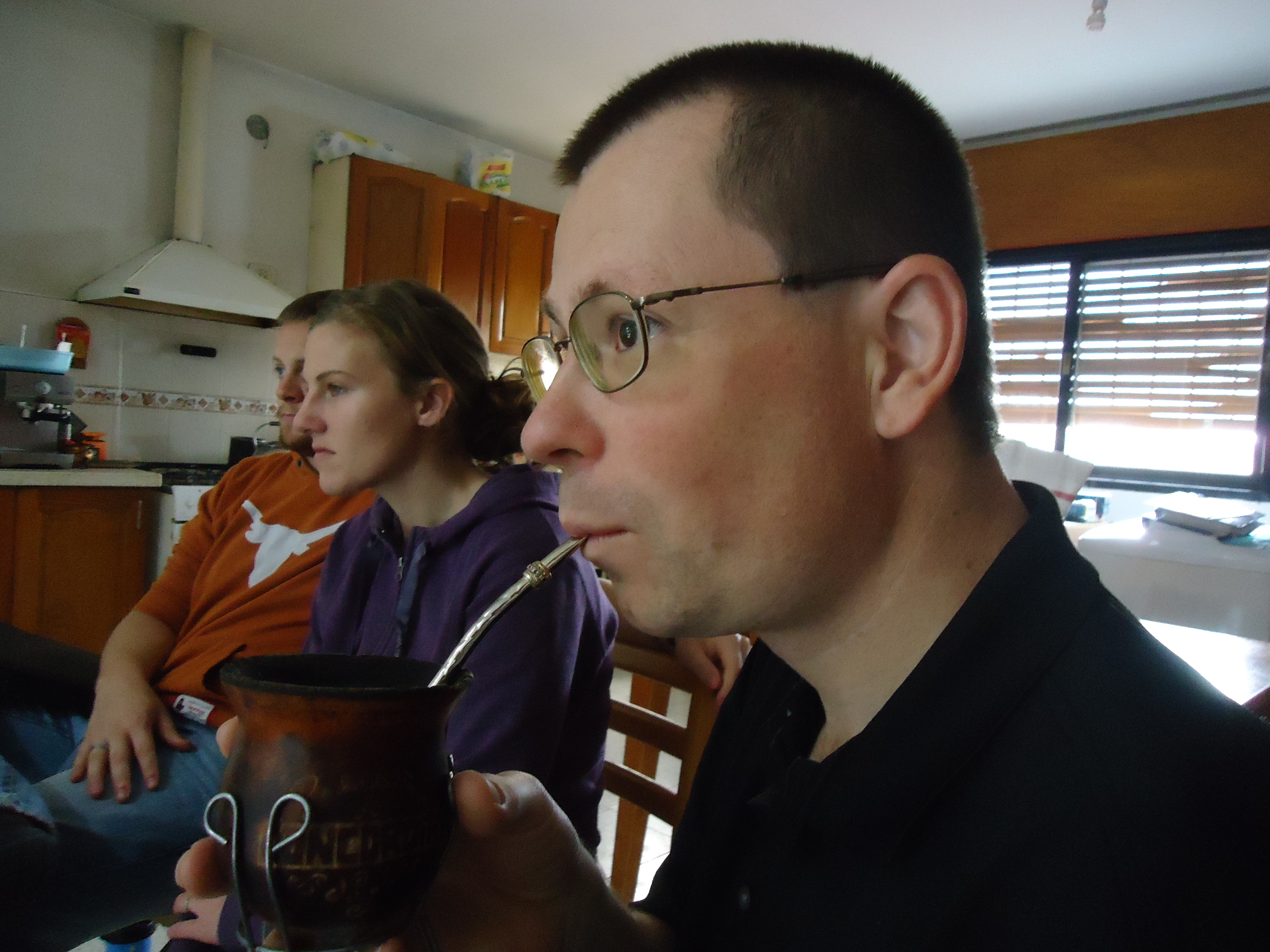 Scott enjoying some Yerba Mate during the Friday Bible Study. I will have to explain more about Yerba Mate in another post.

We did go to their meeting that next day and met their missionary and learned so much. They fed us afterwards and I practiced speaking Spanish with the ladies as we prepared the meal. Yo corté el pan. (Bonus points for translating that sentence in the comments.) 🙂

Our lost luggage was delivered Saturday night. I was so glad because that gave us clean clothes for services.

Sunday we visited two churches. The first I think was a Community Church that was recommended to us by our new friends. Then Sunday night we visited a Baptist Church in town. We really enjoyed the services there.

We also met another Missionary at the Baptist Church. Scott also met him through FB messenger. One of the friends we made Thursday had told him about us. He and his wife invited us to eat at their home Monday evening. So much to write about and not enough space to share it all here. I’ll write more about Monday on another post soon.

I must share one last little thing. Scott was telling another man in the hostel about what God has been doing for us and could tell that every time he mentioned God the man chuckled. It’s hard to say if he thought Scott was just talking foolishness or if he was just laughing out of nervousness of the subject being brought up.

Another man Scott talked with Sunday night told him that he believed the world didn’t need missionaries. According to that man missionaries take away people’s free choice. They oppress people. Scott told him that it was actually the opposite.

Missionaries come to spread the good news that can free people from their bondage. A missionary isn’t to force his beliefs on people. He presents the truth to them in love and gives them the option to accept God’s message or not. It’s really education and opening people’s minds. What’s oppressive about that?

If you don’t believe what I am saying was brought about by God who sees, hears, and knows exactly who I am and what I need. Then you have never had that experience with God. You need to talk with God right now and ask him to help you understand. Ask him to let you experience Him.

You know God did that for blind Baritmaeus. He asked Jesus to return his sight. God answered and his life was changed completely.

Have you experienced Jesus? If Jesus were to come to you tonight and ask you what you want, what would you ask for? Let us know in the comments.

“And they came to Jericho: and as he went out of Jericho with his disciples and a great number of people, blind Bartimaeus, the son of Timaeus, sat by the highway side begging. And when he heard that it was Jesus of Nazareth, he began to cry out, and say, Jesus, [thou] Son of David, have mercy on me. And many charged him that he should hold his peace: but he cried the more a great deal, [Thou] Son of David, have mercy on me. And Jesus stood still, and commanded him to be called. And they call the blind man, saying unto him, Be of good comfort, rise; he calleth thee. And he, casting away his garment, rose, and came to Jesus. And Jesus answered and said unto him, What wilt thou that I should do unto thee? The blind man said unto him, Lord, that I might receive my sight. And Jesus said unto him, Go thy way; thy faith hath made thee whole. And immediately he received his sight, and followed Jesus in the way.” – Mark 10:46-52 KJV