We are still in Argentina and although my husband and I are actually in our 3rd week here I want to pick up where I left off and share our second week with you. 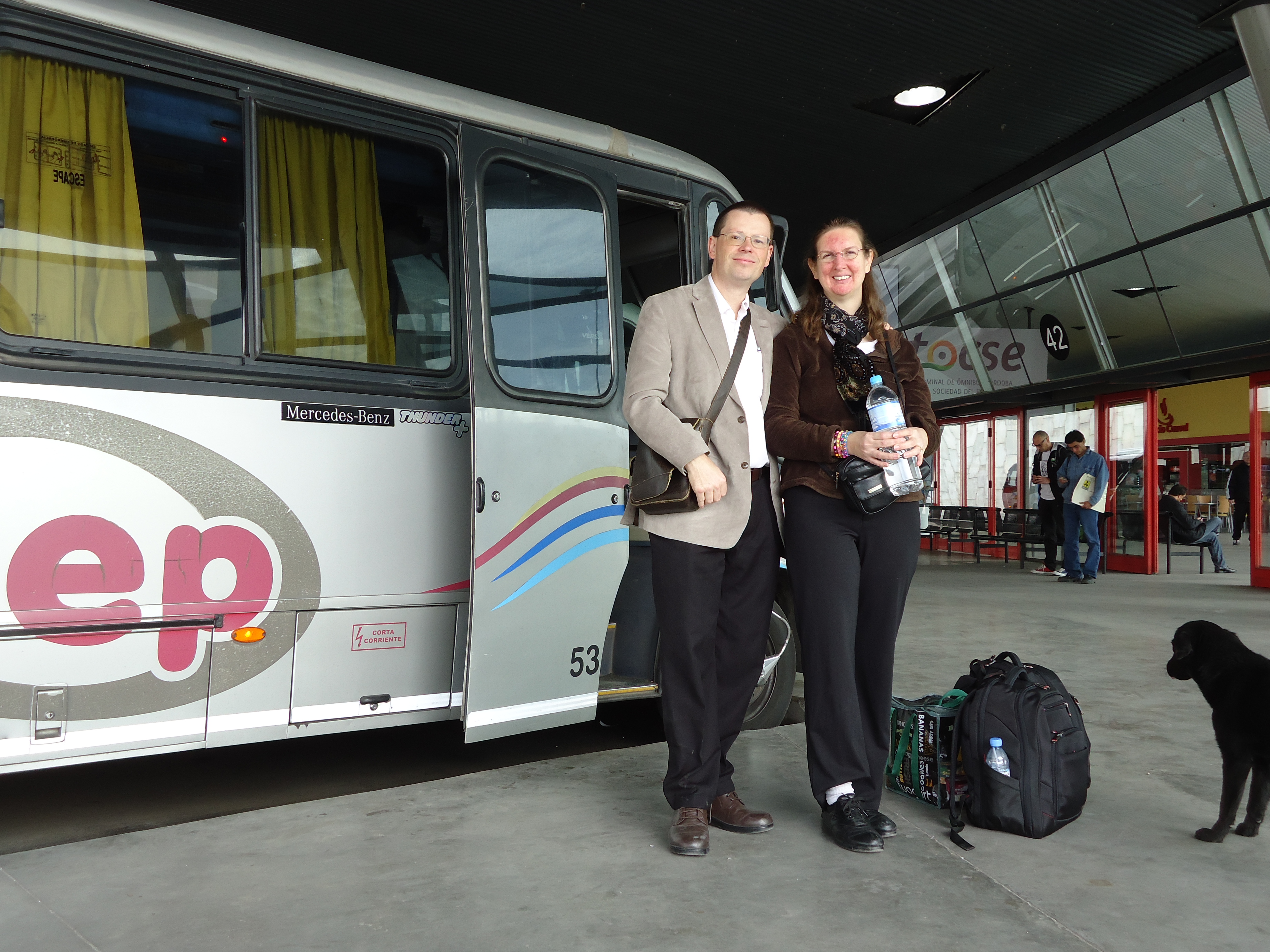 Thursday, September 11: We took a bus to Villa General Belgrano. Our host was their to pick us up at the bus station and took us to their home.

The family we stayed with were wonderful and for the sake of their privacy I won’t give their names. If anyone reading this wants more details about any of my posts, email me. My husband suggested for privacy’s sake that I not give every detail. I am willing to share more with anyone that has specific questions that I might not have answered in my posts.

Okay back to our trip. When we arrived we visited with our hosts, unloaded our luggage into their guest house, and settled in for the evening.

It is interesting how we met this family. I was looking up homeschoolers in Argentina. There are some but not a lot. I found an email address for a homeschool group listed online. I emailed the contact person listed and she told me about her friends near Córdoba that also homeschooled. However the email address she gave me didn’t work.

I changed directions and emailed a Missionary family in Buenos Aires. I told them our plans to fly into Córdoba. They told us about two families near where we would be that were praying for someone to come to their area. They also homeschooled. She gave me their email address and it was the same family that the other person had given me. This time I had the correct email address.

Their town is Villa General Belgrano in Córdoba province. They and their neighbors have been having Bible Studies in their homes. There are two main churches in town and neither of them are very deep in the Word of God. One of the churches doesn’t even have a Pastor to lead them. 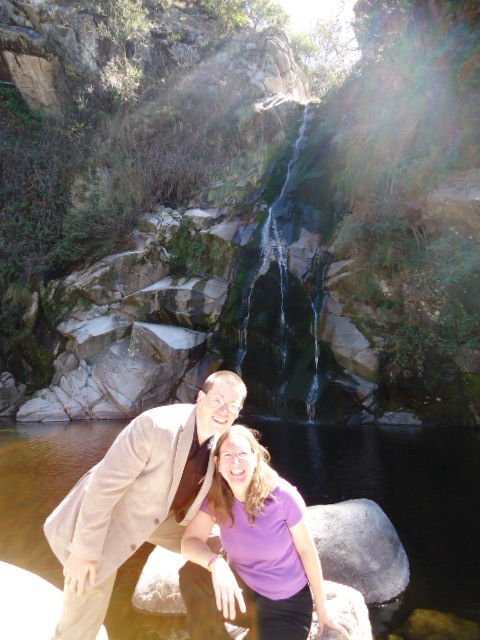 A small waterfall at La Cumbracita. It was quite a climb to get to it but it was pretty even if it was small. 🙂

Friday, September 12: We made a short visit to La Cumbracita. It is a town that is now mostly pedestrian. I think it used to be completely pedestrian but there were quite a few cars on the roads that day. There weren’t as many as you would see in most towns.

We climbed up to a very small waterfall and visited with several Argentines who were there on vacation. They were very friendly and helpful. They took our picture in front of the waterfall. We rode the bus back to Villa General Belgrano and walked to the home where we were staying.

That evening we visited their home Bible study. They had a good attendance of about 20 people in their livingroom. Scott had asked them to go ahead and have their services the way they normally would and he would speak at the end.

Three of the children played violins during the song service and Scott played a guitar. We sang a few songs, had the Bible Study, Scott spoke, and then we had a fellowship meal.

We really enjoyed visiting with all the members of their Bible Study. 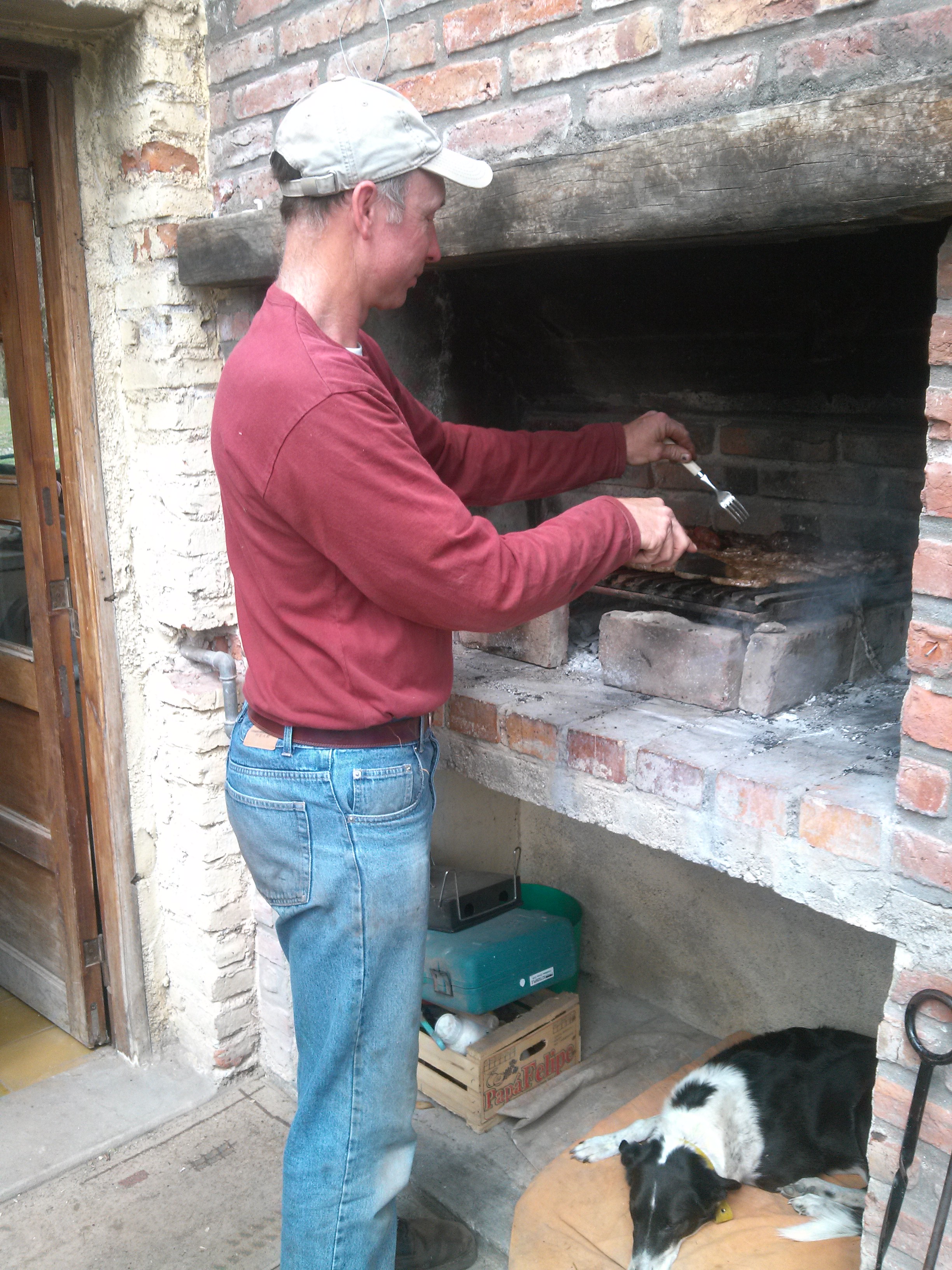 Our host preparing the asado. Everything was delicious!

Saturday, September 13: We enjoyed the most amazing Asado at lunch. Asado is what we North Americans would call a Bar-b-que. Our hosts invited their neighbors to join us and cooked an amazing meal. 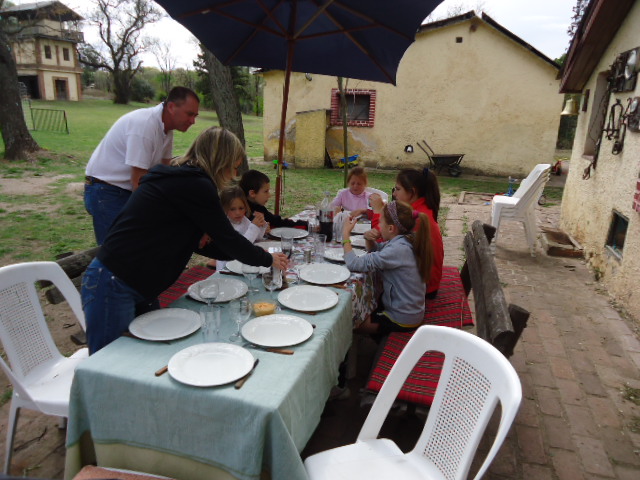 Not everyone was at the table yet for this picture but this was outside our hosts home during the Asado.

After lunch we went with the neighbors to the local grocery store. We found peanut butter. There was only one kind of peanut butter there but they do have it. They also have hot dogs.

Sunday, September 14: We visited a church in the morning that did not have a pastor. They followed mostly liturgy and the lady that led the service read the sermon that was sent to them. I thought she was just reading a story but Scott told me that was the sermon. It was a very short service. 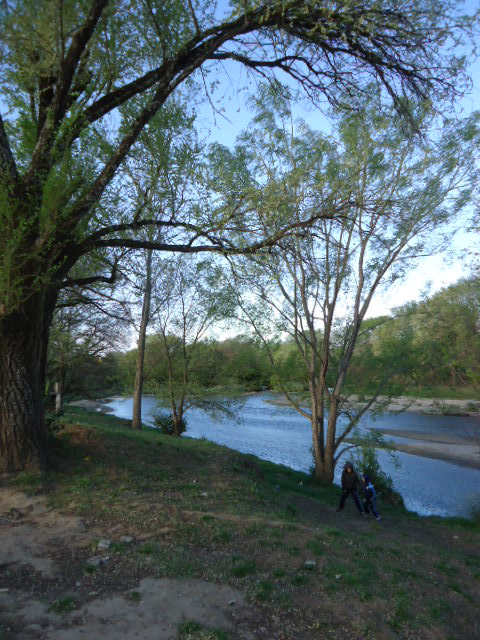 The river we ate beside.

We walked back to our hosts’ house and ate lunch. We then went for a drive to another nearby village. There are a lot of people in that area and we could see a lot of potential for starting several churches there. We enjoyed cake and maté by the river.

That evening we attended services at another church. The people were very friendly and welcoming. They had us come forward to introduce ourselves before the sermon. They asked Scott to say a few words and he read a Bible verse and could have gotten into a sermon but instead he held himself back to a brief devotion about God.

The sermon that followed I could not understand at all. I understand some Spanish but there are times that my mind just zones out and I don’t understand a word anyone is saying anymore. My husband later told me what the preacher’s sermon was on.

After the service was over we walked to the corner and our host picked us up. The evening service was so long that we got back to their house very late. They had supper on a tray for us and we were able to go back to our room and talk about the day. 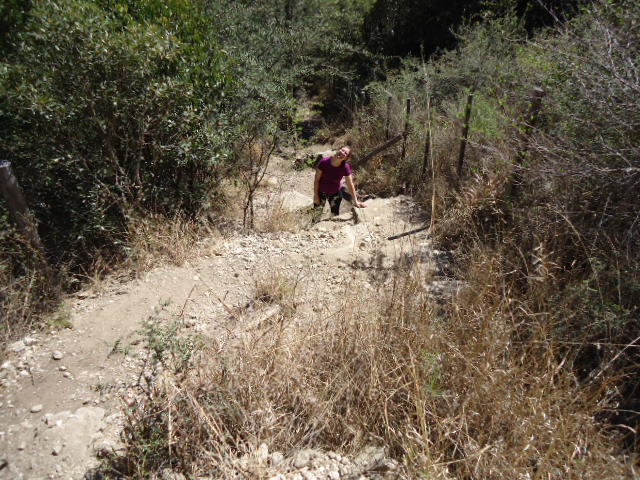 My husband took this picture of me. I think I was asking him if we were almost to the top. Can you believe people were running up and down this hill?

Monday, September 15: We had our bags packed ready to go. Our original plan was to head back to Córdoba city sometime during that day. When we came in for breakfast they told us that their neighbor was planning to go to Córdoba on Tuesday and offered to take us if we would like. We had a return ticket but we decided that would be great to visit with him the whole ride back rather than just looking out a bus window.

We were glad that they could use our return tickets. All they will have to do is change the name on it. His mother goes to Córdoba by bus sometimes and could use our tickets. 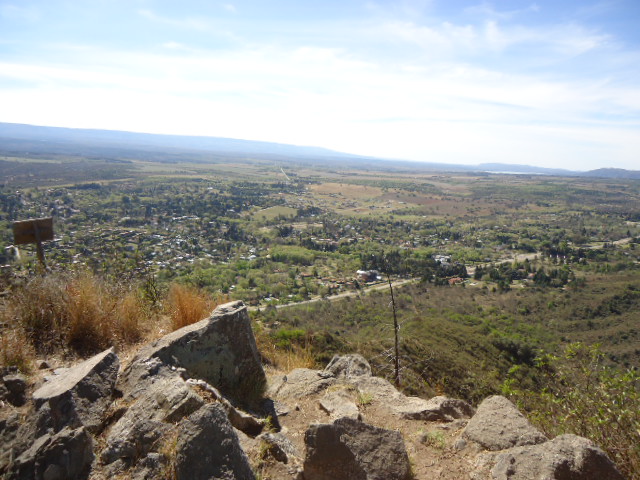 View of part of the city from the large hill we climbed. I don’t think we had made it quite to the top here.

We were really glad about that and enjoyed one more day in Villa General Belgrano. During the day time while the mother was teaching her children we visited a “mountain”. Technically it was a very very big hill but to us Texans that was a mountain. It was a long hard climb up. We went up it before most people were around. It seemed like a quiet place but by the time we got to the top people were starting to come out to climb it for exercise. We started down this hill and were being passed twice by people running up and right back down.

I took a video going down the mountain. I’m going to try to get that put together and share that with you at some point. That video may not get done until we get back. I had fun with it though. We walked back and enjoyed tea time with the neighbors.

That night we had a very good visit with our neighbors talking about the future and then enjoying hearing stories about their families. We had a lot of fun hearing some of the cultural differences in how they each were raised right there in Argentina.

They would really like to see a church started in their town. Scott and I both see great potential there but it would be a few years of preparation before we could actually start something there.

It’s hard when you see a need but can’t immediately fill it. We encouraged them that they really were doing a good job. We will be keeping in touch. 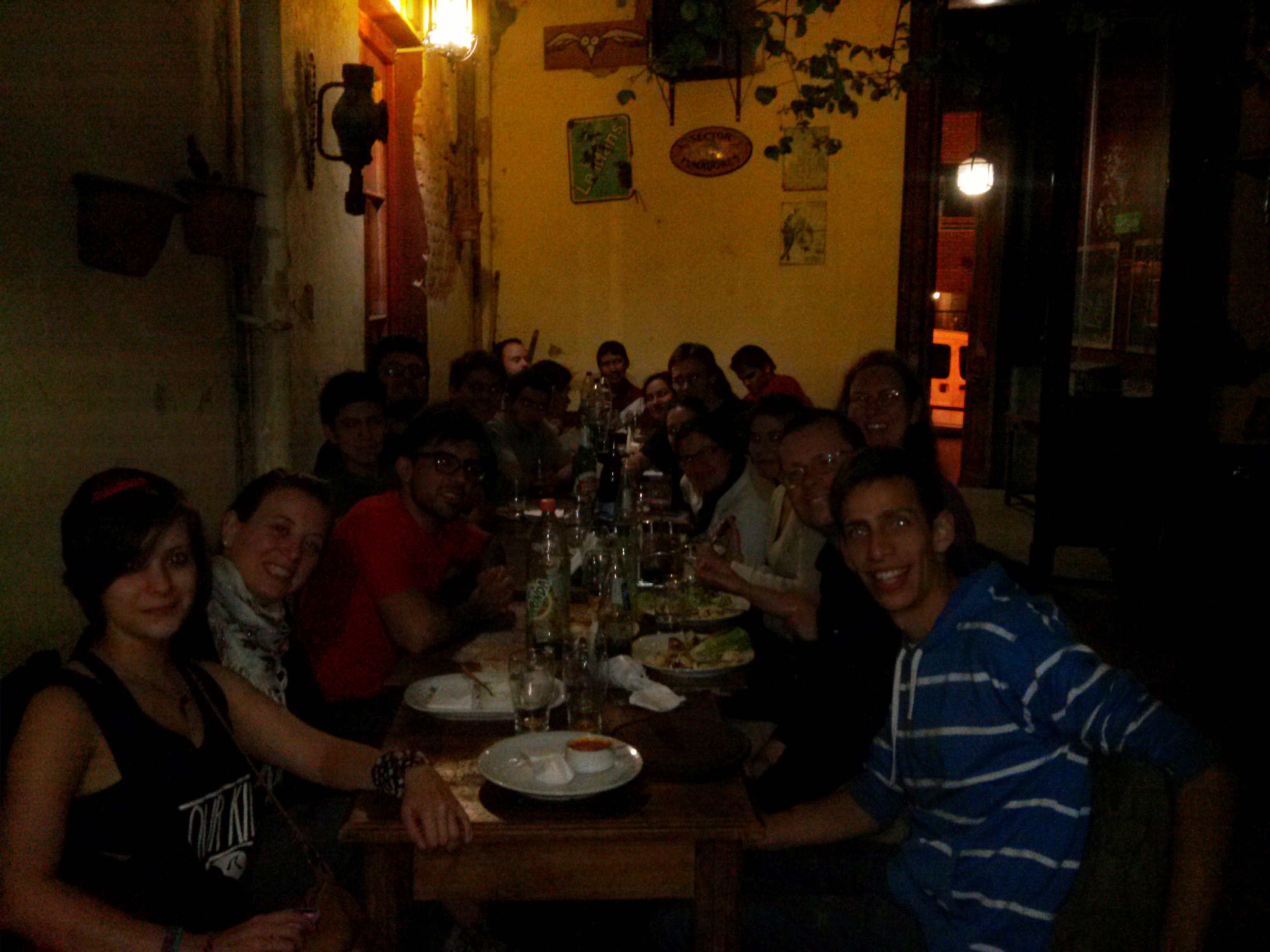 The group we ate with in Córdoba. They are all learning English and enjoyed practicing with us. Scott had the opportunity to talk with some of these college students about God that night.

Tuesday, September 16: We rode back to Córdoba with the neighbor and enjoyed a very good visit with him. I practiced a line in Spanish in my head and when he dropped us off at our hotel I said, “Tu carro es más mejor que el autobus.” He smiled and told me very good and that he was glad I liked his car better than the bus. 🙂

That evening we went to the English Ministry with the friends that we met the first night we arrived. They meet every Tuesday and we were able to talk with them again and met some new people. When we went out to eat after our trip I sat by a lady that eats a raw vegan lifestyle. My husband and I were eating about a 70% raw diet this past summer. We’re not vegan but we had quite a bit in common that we were able to talk with her about. She even shared with me where we can get vegetables at a really good price in Córdoba. She also told me about a church her family attends. We plan to visit there our last Sunday in Córdoba.

What are our plans? Right now we still feel this is where God wants us to go. Scott told me that this trip has been different from all the Mission trips we have taken before. I agree.

We came here not knowing anyone in person. Only a couple of contacts by email was all we had. God has opened doors for us from the day we got here and those doors just feel like they are opening wider the longer our visit has been.

Now what I have shared here has only been two weeks. I have another week of activities to share and another week ahead of us.

Pray for my parents and our children that are staying with them. They all went through a sick spell and now our 4 year old may have Mumps. It’s hard being here away from our family when I know they need us there.

Thank you all for praying for us and following along with us. As always feel free to email or ask questions in the comments. My next post will be about our time traveling to and visit in Buenos Aires.