We have just finished our third week of our time here in Argentina. We have only one more week to go before we fly back home to our family in the United States. The time has been going by so fast. We have been staying very busy and meeting so many people during this trip that it is hard to get it all into these blog posts.

Let me just say that these posts are more of a summary of our trip. We have learned so much more from this trip that these posts would be very long if I wrote it all. So for now I will stick with the summary and later fill in some details when I have more time. 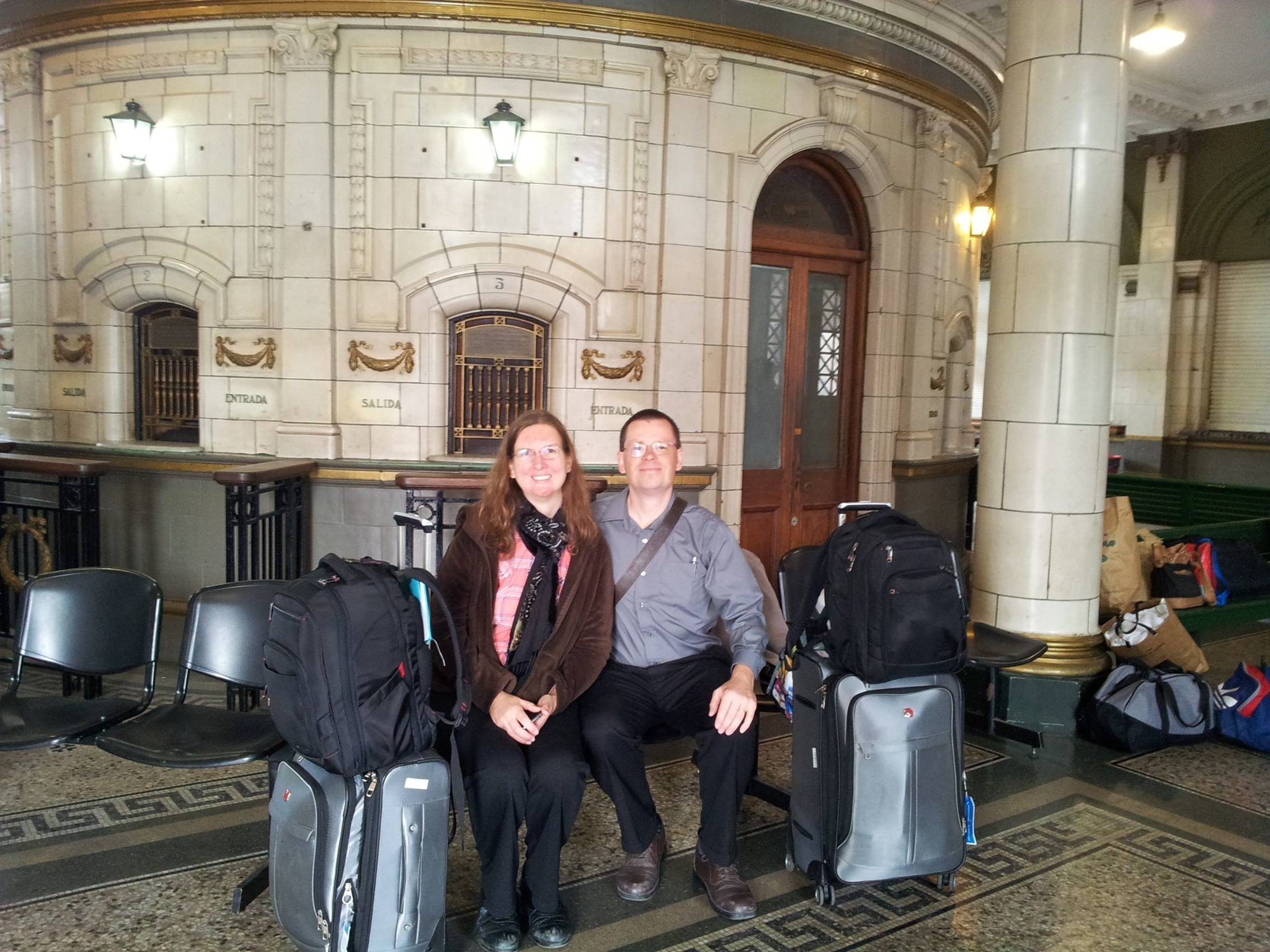 We felt like we stepped back in time at the Train Station in Córdoba.

Wednesday, September 17: We packed our bags, got some empañadas, and took our luggage to the nearby train station. Scott had already reserved a room on the sleeping car for us to stay in during our overnight trip to Buenos Aires. It may have been quicker to take a bus but the train would be more comfortable and it was the same price as one night in a hostel. Scott had never ridden on a real passenger train before. I only riding a small one for a field trip in school. A train ride in a real sleeping car was a fun new experience for us. 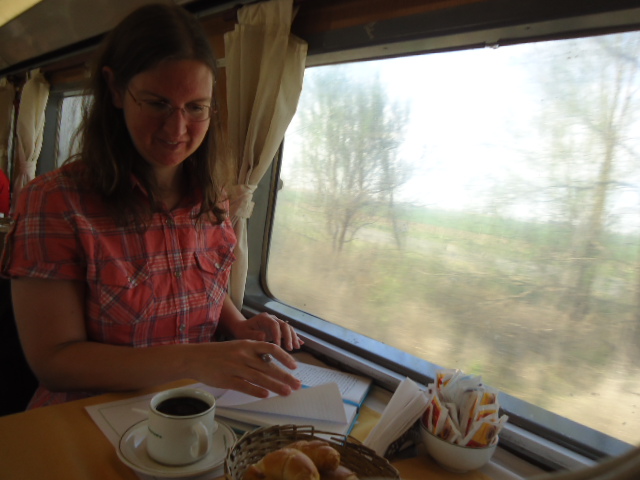 Scott took this picture of me writing in the train’s dining car.

I could write a whole blog post just about the train ride but this is suppose to be a quick summary of the whole week! So I will just say for now that we really enjoyed the train ride and took a lot of pictures. Maybe I can share some of those in a later post.

Thursday, September 18: The train dropped us off at the station in Buenos Aires, Argentina.  Scott and I found a hotel. We then ventured out to explore a little of the city.

We had our picture taken beside a giant over 200 year old rubber tree. We walked through the Recoleta Cemetery. Recoleta is a very old and very famous cemetery in Argentina. 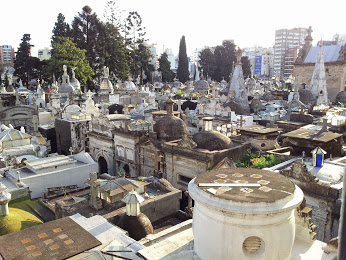 After touring the cemetery, we toured the museum inside the church next door. The church has a very interesting history. The monks that once lived there had a 12 acre orchard and vegetable garden where the cemetery now stands. I have a lot of deep thoughts in places like this. 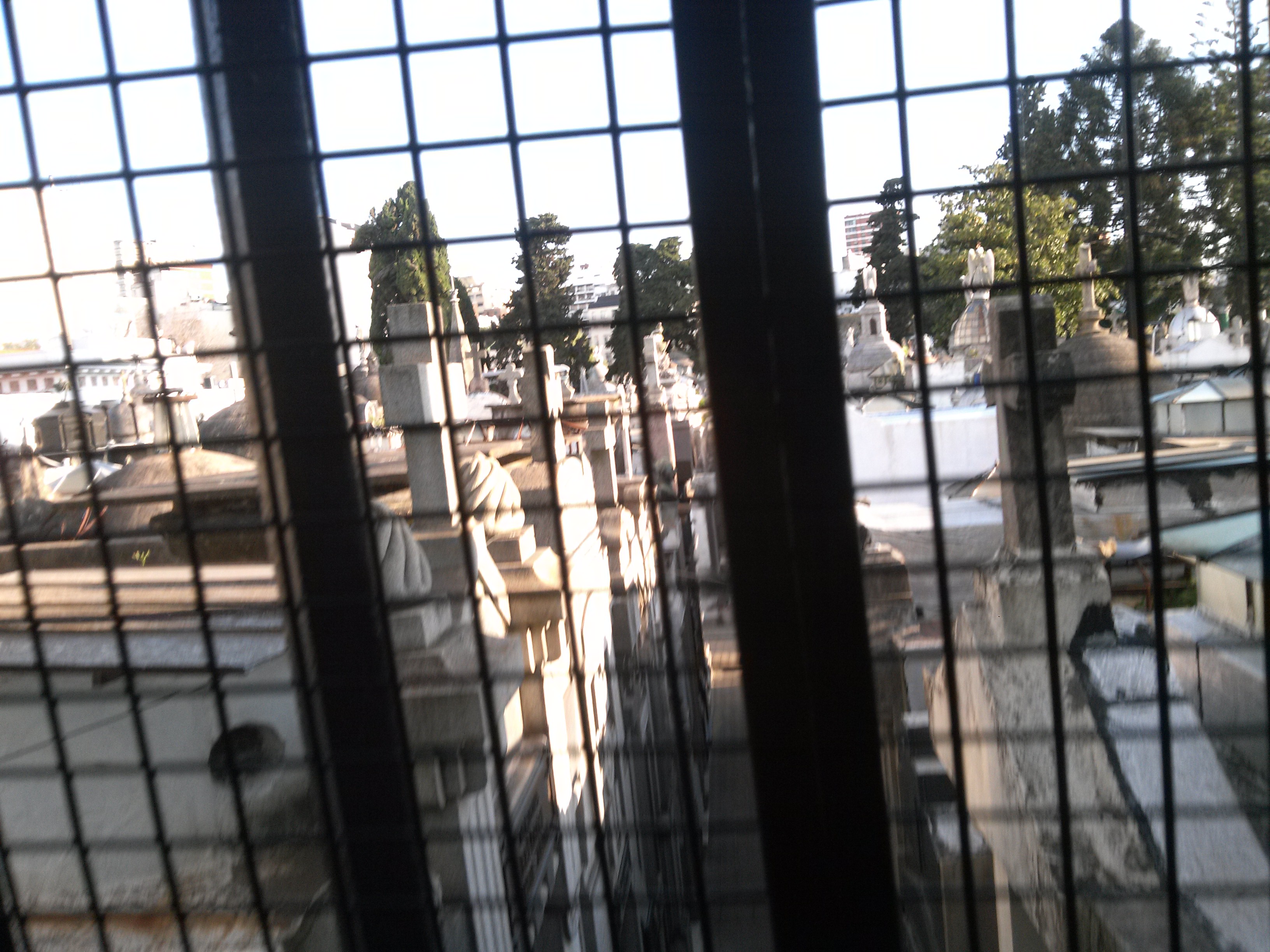 My husband and I looked out a window over the orchard where Recoleta Cemetery now stands. What would the Monks that gave up everything to live a life of poverty say about their beautiful orchard turning into a cemetery that boasts the city’s most valuable real estate?

Those windows are the same windows where monks would kneel looking out over their garden and pray. They vowed a vow of strict poverty. They denied themselves earthly pleasures. I wonder if that orchard and garden was the one thing they were allowed to enjoy.

Now it is a place for people to tour and for those who can afford to pay to be buried in the most coveted resting place in Argentina.

Friday, September 19: We took another train to a neighboring town of Pilar. While there we met a wonderful Missionary family, the Greenwoods. We learned a lot from them. The Greenwoods have been Missionaries in Argentina for 9 years. They answered many of our questions and shown us many things about life in Argentina. 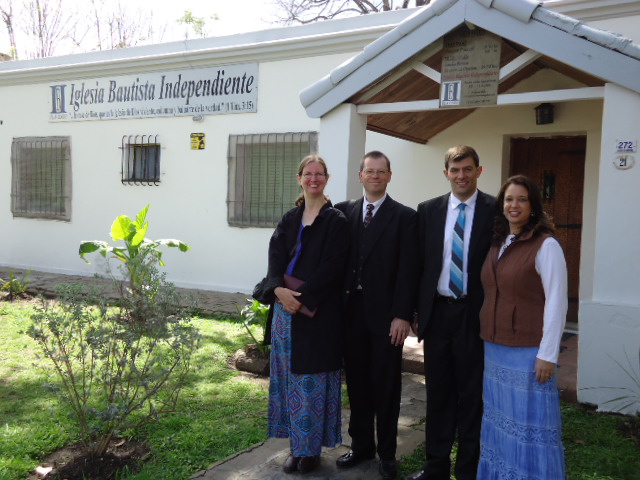 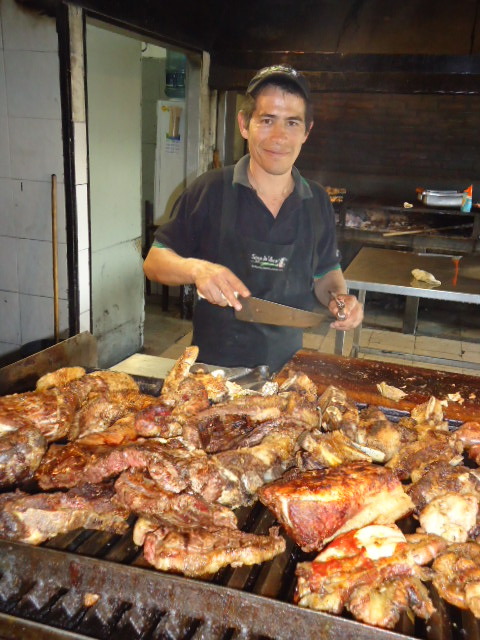 The grill at Sigue La Vaca in Pilar 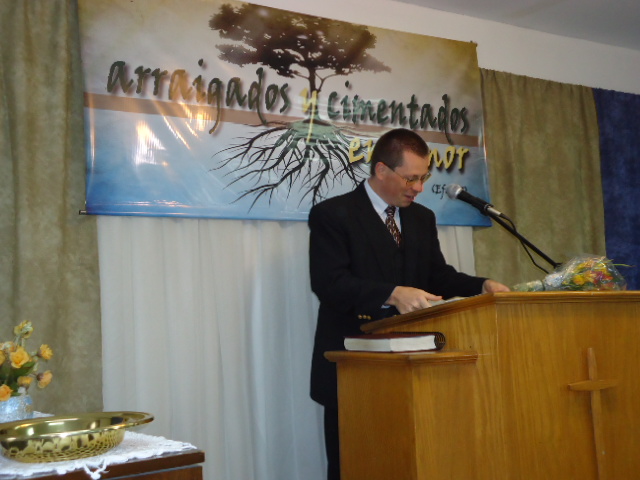 Saturday, September 20: We attended the Greenwoods’ Mission for their Evangelism Ministry. We passed out tracts in the city’s plaza area where many people were enjoying the weather. We were impressed by how open people were to receiving the tracts the group passed out. Sunday, September 21: Scott accepted Bro. Greenwood’s invitation to preach that morning and gave a message from Acts 16 about following God’s call through closed and open doors.

Monday, September 22: They took us to an all you can eat buffet called “Sigue La Vaca” translation “Follow the Cow”. The food was really good! 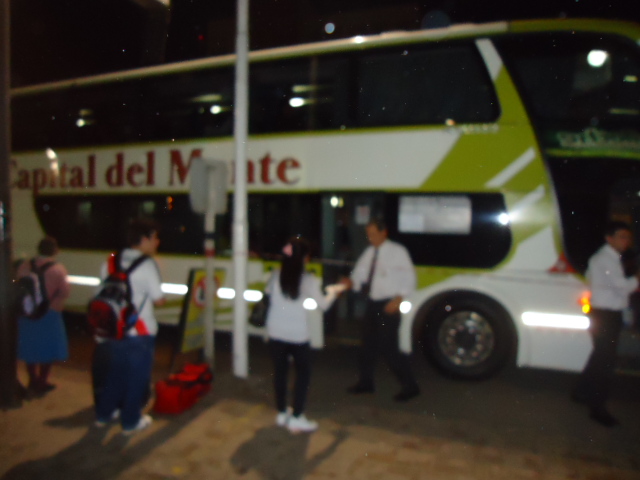 We rode right above the driver’s seat on the bus to Posadas. This was my first time to ride on a two story bus.

After the meal we walked around a shopping center. Then back at the Greenwoods’ home we packed our bags and got ready to catch the bus to Posadas.

The waiter brought our galeto on a sword at La Querencia in Posadas.

Tuesday, September 23: We arrived in Posadas took a taxi to the hotel. I got a little bit of a sunburn. Okay, for me it was a lot of a sunburn but that’s just how it is with sensitive skin and Rosacea. I don’t have to be in the sun long before my face is as red as a beet.

Argentina is in the southern hemisphere below the equator. That makes their seasons opposite of ours in the United States. Right now it is Spring here in Argentina and the north is hotter than the south. 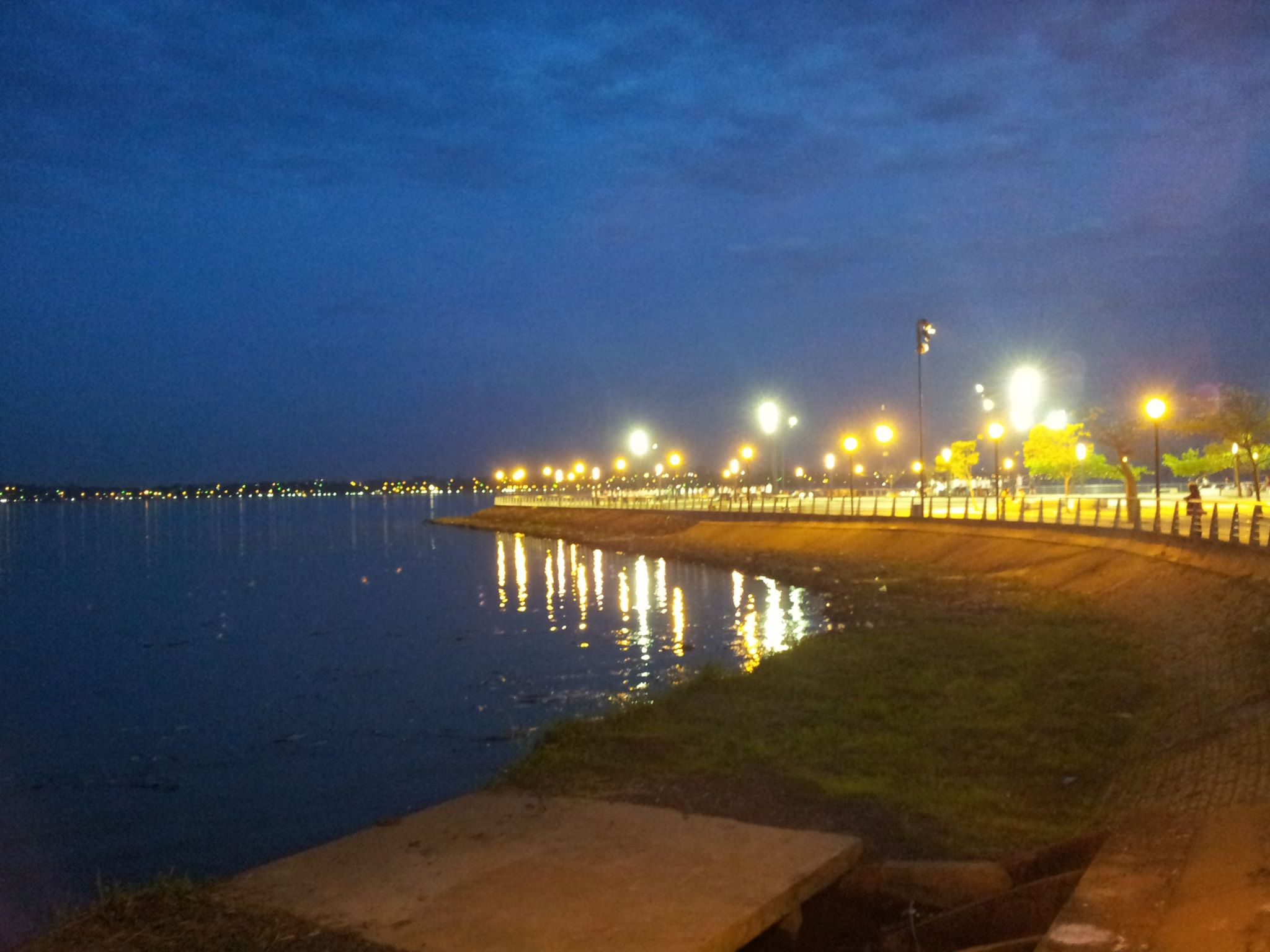 A view of Encarnación Paraguay from the shores of Posadas, Misiones, Argentina.

Wednesday, September 24: We take a walk around Posadas. We escaped from the heat during the siesta hours and then went back out to walk along the river. From the sidewalk we could look out across the river to Encarnación, Paraguay. 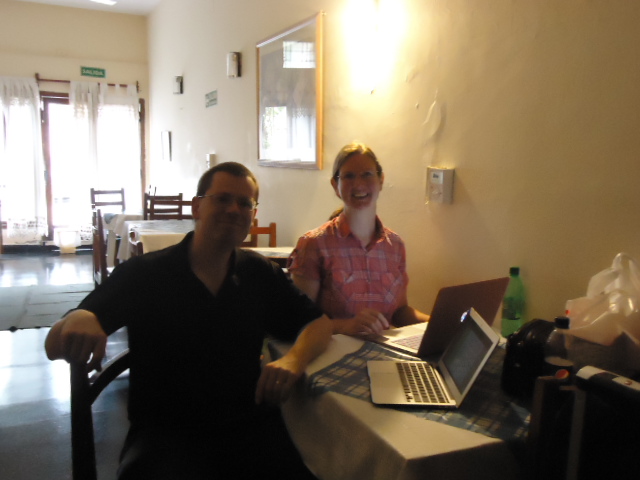 Working on recording everything while at the hotel in Posadas.

Thursday, September 25: Scott and I checked out of our hotel and had breakfast in their lobby. Our bus was scheduled to leave that afternoon so I stayed at the hotel with our bags while Scott went to talk with someone at a church a few blocks away. The man he talked to explained some of the beliefs of their association of churches. Not all Churches that call themselves Baptists believe the same things. After Scott got back we both sat down to get everything written that we’ve been learning. After we worked on our computers for a while, we called a taxi and went to the bus station heading back to Córdoba.

Scott and I are in the middle of week 4 of our journey. It’s been a full month.  After this week’s post I will share several posts taking a little deeper look at what we have seen and learned during our time here in Argentina.

Thanks for following along with us. As always if you have any questions feel free to ask in the comments or by email. Stayed tuned for week 4 which I will post towards the end of this week.